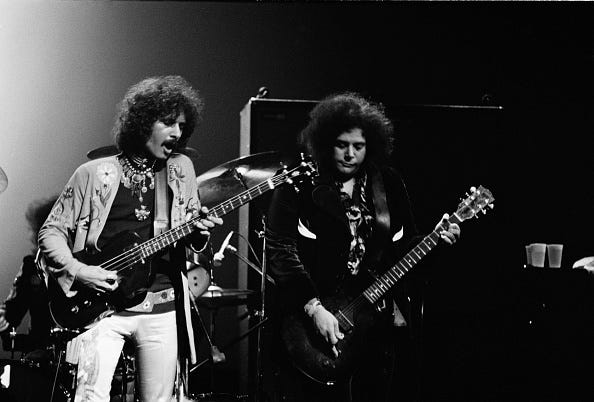 Leslie West, the Mountain guitarist who created "Mississippi Queen" with the band, passed away on Wednesday morning. He was 75.

West's brother, Larry West Weinstein, confirmed the news to Rolling Stone. West was rushed to the hospital on Monday after suffering cardiac arrest at his home. He never regained consciousness.

West was the iconic voice behind "Mississippi Queen," which appeared on Mountain's debut album "Climbing!" in 1970. The song has been featured on countless soundtracks, TV shows, and even in a rendition of the game "Guitar Hero."

Earlier this year, West revealed to Guitar Player that the song "has just everything you need to make it a winner. You’ve got the cowbell, the riff is pretty damn good, and it sounds incredible. It feels like it wants to jump out of your car radio. To me, it sounds like a big, thick milkshake. It’s rich and chocolatey. Who doesn’t love that?"

According to Rolling Stone, Eddie Van Halen told the publication that West was one of his biggest influences - right up there with Deep Purple's Ritchie Blackmore.

Along with his musical career with Mountain, West was a founding member of the Vagrants of the mid-sixties - responsible for minor hits like "I Can't Make a Friend" and a cover of Otis Redding's "Respect."